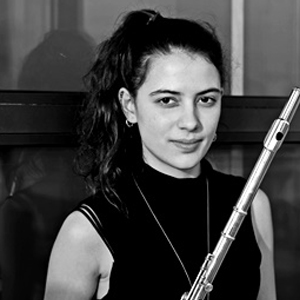 After graduation, she continues her studies at Conservatorium Van Amsterdam, The Netherlands, in the class of Marieke Schneemann, where she developed a particular interest in chamber music and orchestral performances.

She played as a member of “Uva-Orkest L.Pnz Sweelinck”, during the academic years 2017 and 2018, performing in important venues, as Het Concertgebouw or NedPho. Beatrice attended several masterclasses which enriched her playing, to name some: Felix Renggli, Renate Greiss, Robert Dick and Andrea Oliva.

During this past summer, she won the “Antonín Reicha Award for wind instrument players” during the International Summer Academy of the University of Music and Performic Arts of Vienna. The duo Bogaert-Miniaci was born last year at the Conservatorium Van Amsterdam because of the love for chamber music practice.