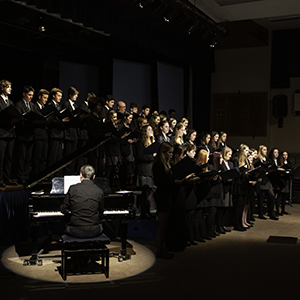 Charters School is a state secondary school in the South East of England. It is a dynamic, high-achieving school with a thriving Music Department where many students participate in a wide range of musical ensembles. The School has a busy musical calendar with a huge range of performances across the year, including termly concerts, musicals, a Carol Service, and many other events both in school and in the local community. This concert will showcase some of the best musical talent on offer at the School, through performances from the Chamber Choir, Senior Choir, Senior Orchestra and soloists.

Musical Director
Irene Anderson has been Director of Music at Charters School since the start of 2019, prior to which she was Deputy Director of Music at King Edward VI School, Southampton. She studied for a degree in Music at Oxford University, followed by a Masters degree in Musicology and Performance. She trained as a recorder player but is also an experienced singer and orchestral musician. Irene has directed a wide range of ensembles including orchestras and choirs, most notably conducting the Southbank Sinfonia in a performance of Poulenc’s ‘Gloria’.

Pianist
Kevin Allen studied piano and composition at the Royal Academy of Music and is a member of the Royal Society of Musicians. He has been involved with Music schools in Britain, the Middle East and Kenya over a number of years, including working as a Director of Music.