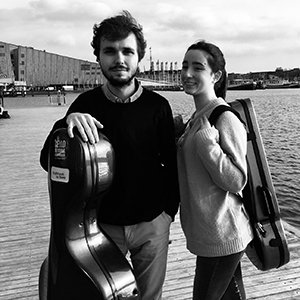 The Entente Cordale duet is formed by the violist Elisa Misas and the cellist Henrique Constância.

Elisa Misas was born in 2000, in El Puerto de Santa María (south of Spain), where she started with the viola at the age of 7. In 2018 she started her studies in the Conservatorium van Amsterdam with Sven Arne Tepl and Marjolein Dispa.

Until the date, she has made many orchestral projects being conducted by Enrico Casazza, Manuel Hernández Silva or Pedro Halffter between others. She took part of the Young Baroque Orquestra of Seville, also collaborating with members of the professional orchestra; of the Young Andalucian Orchestra, and of the Orchestral Studies Academy Barenboim-Saïd,  in addition to other projects.

She has always shown special interest in chamber music, wining the third  prize in the Chamber Music Competition in the R.C.P Manuel de Falla in 2017, where she also got second price in the soloist competition.

Henrique Constância was born in Azores  (Portugal) in 1997. He started his musical studies in the violin and percussion. In 2015 moved to Lisbon to study in the Superior Orchestra Nacional Academy where he was a cello student of Paulo Gaio Lima. In orchestra experience he played in orchestras like Gulbenkian orchestra, Lisbon Metropolitan orchestra, Junge deutsch-französische philharmonie, Portuguese Youth orchestra, and many others. He worked with conductors like Enrico Onofri, Semyon Bychkov, Pascal Verrot, Evegn Bushkov and Jean-Marc Burfin. Now he is continuing his study’s in the Conservatorium van Amsterdam in the class of Gideon den Herder.