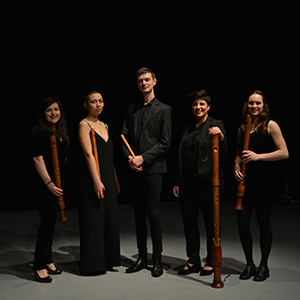 Born in 1991, Emily Bannister graduated from the Royal College of Music with distinction in July 2014, where she studied with Ashley Solomon, Julien Feltrin and María Martínez Ayerza. Previously she studied at the University of Birmingham with Ross Winters. Emily has performed in a number of prestigious concert venues, including The Wigmore Hall, Queen Elizabeth Hall and Buckingham Palace. Most recently, she was awarded the Sir John Manduell Prize for contemporary music at the Bromsgrove International Musicians Competition in April 2016 for her performance of Giorgio Tedde’s Austro.

She has a keen interest in contemporary repertoire, and is currently undertaking further study specializing in this field at the Conservatorium van Amsterdam with Jorge Isaac. This interest is also reflected in her work with the recorder quartet BLOCK4, of which she is a founding member. BLOCK4’s unique and dynamic approach has resulted in them being the first Recorder ensemble to win the Royal Overseas League Competition in 2014, and to become Ensemble in Residence and Handel and Hendrix museum 2015-2017. BLOCK4 have featured on the BBC Radio 3’s In Tune as BBC Introducing Artists, and were awarded the Gold medal at the 2016 Chesapeake Chamber Music Competition in Maryland, USA. They have performed in a number of festivals across Europe; notably the Styriarte Festival in Graz, Austria in 2014 and 2016 and the Utrecht Early Music Fringe in 2017.

Patricia Roa Johansen was born in Colombia in 1991. At the age of three she was adopted and moved to Denmark. Growing up, she instinctively had a preference for music, dancing, and the South American culture. This led her to pursue a Bachelor’s degree on the Recorder at the Royal Danish Academy of Music, where she studied with Bolette Roed. Patricia is currently in the final year of a Masters degree at the Academy.
As multiple cultures always have been a part of her life, she was eager to go abroad. In 2015 she was able to pursue this dream, and initiated her studies at the Conservatorium van Amsterdam with Jorge Isaac. She has received lessons from other famous musicians such as, Dan Laurin, Michala Petri, Erik Bosgraaf, Michael Form, Dorothee Oberlinger, and Jordi Savall.
Patricia has taken part in several ensembles, notably, Snów – a consort quartet founded by Bolette Roed that has toured in both Denmark and Poland. She also created the trio Nuance Matíces, consisting of Recorder, Cello and Percussion. Returning to her Colombian roots, the trio performs a mix of traditional music and newly commissioned pieces based on Colombian rhythms mixed with European classical sounds and elements. Furthermore, she has been privileged to perform as a soloist with the renowned Baroque Orchestra Concerto Copenhagen.

Margarida Yokochi was born in Lisbon, Portugal, in 1996. She studied the Recorder in Escola de Música do Conservatório Nacional, Lisbon, with Joana Amorim where she had the opportunity to develop her interest in early and contemporary repertoire. She also attended Masterclasses with António Carrilho.
In 2015, Margarida initiated her studies at the Conservatorium van Amsterdam with Erik Bosgraaf. There she discovered a passion for consort playing through the guidance of María Martínez Ayerza and Hester Groenleer. She has also been privileged to study with Jorge Isaac, Michael Form, Dorothee Oberlinger and Kees Boeke among others.

During her time in Amsterdam Margarida has performed with a number of ensembles in prestigious venues around the city, including the Oosterkerk, Amstelkerk and Splendor. In 2016 she took part in the Utrecht Early Music Fringe festival as part of Lagrime Consort. In August 2017, she was invited to play with the prestigious double sextet The Royal Wind Music for a number of projects in 2017 and 2018. This includes a performance in Guanajuato, Mexico at the closing concert of the Early Music Season of 2017. In February 2018 she took part in the recording of a new collaborative program of The Royal Wind Music with Psallentes vocal ensemble, and looks forward to the release of this project later in 2018.

Born in 1995, Daniel Scott is a Recorder and Flute player currently studying at the Conservatorium van Amsterdam. His studies are supported by the Countess of Munster Musical Trust for postgraduate study. In July 2017 Daniel graduated from the Royal College of Music, London, with a first class joint honours degree in Recorder and Flute. He studied with María Martínez Ayerza, Katie Bedford and Ashley Solomon. Daniel also took part in an exchange to the Conservatoire National Superieur de Musique et de Danse de Paris where he studied in the classes of Sophie Cherrier and Jan de Winne. Daniel performs regularly as a chamber musician, soloist and orchestral player. In 2016 his recorder trio Equilateral won the first prize at the RCM’s historical performance competition and subsequently gave many concerts around London at venues including Buckingham Palace and the Victoria and Albert Museum. They were also featured artists as part of the Aberdeen Festival of Music 2016. As a flute player, Daniel was selected to take part in English National Opera’s sit in scheme in 2016, ENO Evolve. Throughout 2016 and 2017 he worked closely with the orchestra on various productions such as Berg’s Lulu and Verdi’s Rigoletto. During his time at the Royal College of Music Daniel also worked on many other orchestral projects with conductors such as Vladimir Jurowski and with members of the Chamber Orchestra of Europe. His current studies in Amsterdam are focused on developing his early music performance skills, of which renaissance music is a particular passion of his.

Nina Altenburger, born 1997 in Austria, is currently studying in her Bachelors at the Conservatory of Amsterdam with Jorge Isaac. Around the year, she also gets lessons from teachers such as Erik Bosgraaf, Michael Form and Dorothee Oberlinger. She attended masterclasses in Hungary with Erik Bosgraaf and the Czech Republic with Jostein Gundersen.
In her previous education with Regina Himmelbauer, she took part in many competitions and won the 1st prize for her solo performance and the 2nd prize with an ensemble at the national competition “Prima la Musica” in 2013. Two years later, she also was one of the best in her category, receiving a 3rd price. Her specialty was to risk the combination of early and new music when combining recorder and bass guitar. She was also awarded a 3rd prize in 2015 for the “Jenő Takáts Stipendium”. In the Open Recorder Days Amsterdam competition in the same year, she received a special prize for the “most inventive programme concept”. This prize was invented by the jury because her performance was so different from all others. She has played concerts in many different prestigious venues such as the embassy in Vienna and was member of the orchestra for the children’s opera “Pollicino” in 2014. Last year she was part of a live performance on the television show “Tijd voor MAX” and shortly after was broadcasted on “Radio 5” in the Netherlands.