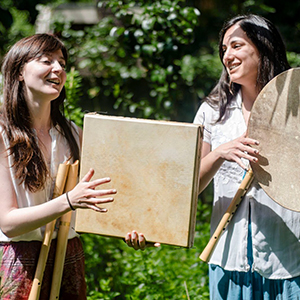 Giesta is a duo focusing on the cross between early western notated music and oral traditions of Mediterranean countries. Two voices, recorders and traditional percussion are used by Joana Guiné and Irene Sorozabal as the tools to create and reinvent these repertoires. Giesta follows an historically informed perspective, but nonetheless with an honest creative mind of a 21th century experience.

Coming from Spain and Portugal, the duo is based in the Netherlands where they both studied recorder in the Conservatorium van Amsterdam. Irene is currently a master student of Historical Singing with Xenia Meijer, at the same conservatory, and Joana is studying classical singing with Selma Harkink at the HKU Conservatorium in Utrecht.