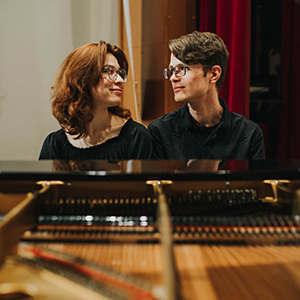 Keyboard duo Hammertime is an ensemble exploring the keyboard duo concept as wide as possible. Its repertoire lies from Mozart and Dussek to Lutoslawski and Pletnev, and being performed on forte and modern piano(s) in various halls, such as Zaryadye chamber hall and Rachmaninov hall in Moscow, Philharmonia of Bialystok, Sweelinckzaal of Conservatorium van Amsterdam and Bullekerk Cultureel Centrum in Zaandam.

Formed by Olga Matieva and Nikolai Martynov during their studying piano, fortepiano and harpsichord at Moscow Tchaikovsky conservatory, the ensemble started with usual piano duo repertoire. But a few months later an experiment with performing on fortepiano has discovered the way that the duo keeps exploring now.