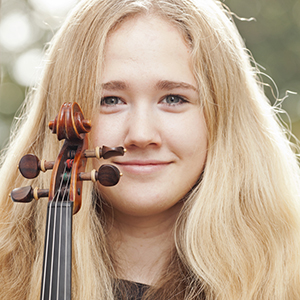 Polish violinist Karina Sosnowska started playing violin at the age of 6, completed 13 years of musical education in Music School in Gdynia, for many years under the watchful eye of prof. Małgorzata Skorupa.

Karina won awards in many international and nationwide competitions in Poland for solo and chamber music performances. As a teenager she got involved in historical performance of medieval, renaissance and baroque music. She was awarded 5 times with scholarships for artistic achievements of the Major of the city of Gdynia.

Since 2017 she is completing her bachelor studies with prof. Eliot Lawson in Conservatorium van Amsterdam. She is also performing with Baltic Sea Philharmonic (conducted by K. Jarvi) and Nieuwe Philharmonie Utrecht (conducted by J. Leertouwer). Karina currently focuses on playing a lot of concerts in the Netherlands and trying to deepen her historical performance skills.