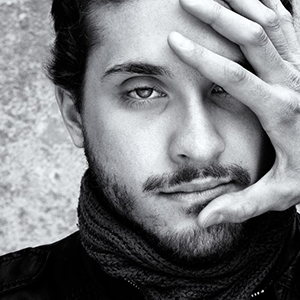 Michele Mazzini studied classical clarinet in Milan conservatory G. Verdi and graduated with maximum evaluation in 2016. He also studied composition and piano as side subject in the same academy. He attended international masterclasses in Lugano, Siena, Graz and Lier.

After his master graduation in 2017, he attended a practicum in Stuttgart with Marco Stroppa’s composition class and, in 2018, studied improvisation in Siena Jazz with Stefano Battaglia. He is currently a bass clarinet master student at the Conservatorium van Amsterdam specializing in new music with Erik van Deuren.

Michele has been constantly active in the contemporary music world: with the group Improvviso Fantasia he performed on various occasions in Milan, Rome, Turin, Trieste, with music by Cage, Stockhausen and Maderna. He recorded the world première of Sylvano Bussotti Grandi Numeri (Arspublica). In 2018, he performed the Italian première of Cornelius Cardew’s Treatise in Milan’s Museo del 900.

Since he arrived in Amsterdam, he has performed at Muziekgebouw and Eye Film Museum as a member of the Score Collective ensemble and, as a soloist, in De Ruimte for Nieuwe Noten Amsterdam at Concertzender radio program (Utrecht) and in Vondelpark Openluchttheater Festival, in June 2019, with the world première of his new Light Blue project.