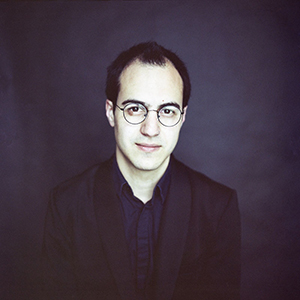 Nadav David Katan was born in Israel in 1991. He started his piano studies in Karmiel Conservatory (Israel) with Mrs. Diana Bucur.

In 2017, Nadav graduated the Master degree (M.mus) in piano performance at the Conservatorium van Amsterdam (Holland) in the class of Prof. Naum Grubert and later continued his studies with the well-known piano pedagogue Jan Wijn.

Currently, Nadav is pursuing his Ph.D. in piano performance at the University of Antwerp in cooperation with the Royal Conservatory of Antwerp, in the class of Prof. Sergei Edelmann. As part of his studies, Nadav is with the DocARTES doctoral program of Orpheus institute in Ghent (Belgium).

Nadav was awarded scholarships from the America-Israel Cultural foundation between the years 2010-2016 and excellence scholarships from Buchman Mehta school of music.
In 2015 Nadav was awarded an excellence scholarship from “Holland Scholarship” by the Dutch government.
In 2016 he was awarded the ‘Talent Grant’ from AmsterdamseHogeschoolvoor de Kunsten.
In 2016,he was Awarded Scholarship from ‘JacquesVonk Funds’.
In 2015 Nadav won the 1st prize in “Arianne Katz” competition in Tel Aviv, Israel.
Several times received prizes in “piano forever competition”, Ashdod, Israel.
In 2010 he won 1st prize in the ‘Concerto’ competition in Jerusalem, Israel. As a result, he performed as a soloist with the Sinfoniette Be’er Sheva.

Nadav has the privilege to have a Steinway S grand piano at his disposal due to the curtesy of the NationaalMuziekinstrumenten Fonds.