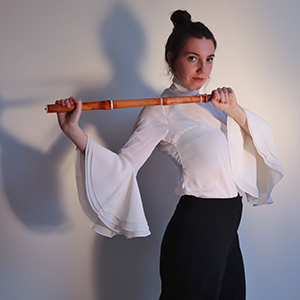 Nuria Canales (Madrid, 1993) started her flute studies at the age of 9 years old in Madrid, where she obtained her Diploma and the Special Final Award in 2011. She completed her B.Mus. studies in 2015 at Musikene (Basque Country), graduating with Honours and receiving Cum Laude for her final thesis, and in 2017 she obtained an M.Mus. in flute at the Conservatorium van Amsterdam. Nuria always had a great interest in Early Music practice, and she has been playing the baroque flute since 2013. She is currently studying with Jed Wentz at the Conservatorium van Amsterdam, and she has had lessons and masterclasses with early music specialists Wilbert Hazelzet, Marten Root, Anne Smith, and Thérèse de Goede.

Nuria made her debut as a soloist at the early age of 10, and she played again as a soloist in the RSMM (Madrid’s High School of Music). In 2013 she was the prize winner of the Soloists Contest MUSIKENE 2013-2014. Nuria has regularly collaborated with the OSE (Euskadi Symphonic Orchestra) and the BOS (Bilbao Symphonic Orchestra), where she played as a soloist in 2015. During that year she also participated as a soloist in a number of projects conducted by Arturo Tamayo. Nuria received the Jury’s special mention at the Young Musicians Standing Contest Juventudes Musicales de España, Valladolid 2011, theBärenreiterUrtext Prize in 2011 and 2015 at the same competition, and the Second prize at the International Contest AndaluciaFlauta 2008.