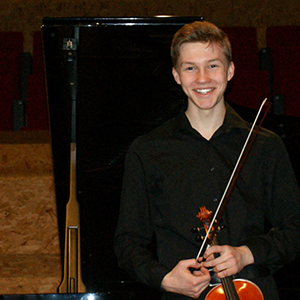 Pauli Paananen was 5 years old when he started playing the violin as a pupil of his parents, who both are musicians.

At the age of 7 he became a student of Hans Scheepers in Amstelveen and now studies with Peter Brunt in his first year at the ‘Conservatorium van Amsterdam’.

He has also had lessons from a.o. Anatoli Melnikov at the ‘Kangasniemen Musiikkiviikot’ in Finland and several teachers at the Sibelius-Academy in Helsinki.

He is the concertmaster of the ‘Noord-Hollands JeugdOrkest’, conducted by Bas Pollard. He also won a third prize at the ‘Inter Provinciaal Muziek Concours’ together with the ‘Helders Strijktrio’ in 2008.