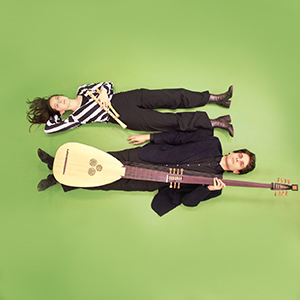 Irene Sorozábal and Luke Starkey together form Pleiades Duo, two musicians that comprise of a cluster of instruments and voice. Pleiades Duo takes you on a journey to the life and times of the 16th and 17th centuries through music, poetry and storytelling. Their broad range of repertoire consists of Italian monody and canzonas of the early 17th Century, chansons and dances of the French court of Claude de Clermont and Jacques II , and polyphonic music of the Franco-Flemish and Italian schools. Based in the Netherlands, Irene and Luke have performed together at the Rijksmuseum, The Cervantes Institute in Utrecht, and Huis de Pinto in Amsterdam.

Spanish recorder player and mezzosoprano Irene Sorozábal (b.16 June 1996) is based in Amsterdam. She has performed Early Music and Contemporary music in festivals such as Gaudeamus Muziekweek and Amsterdam Fringe Festival. She obtained her Recorder Bachelor degree in 2018 with Erik Bosgraaf as her primary tutor. Irene has played with the Royal Wind Music, double consort recorder ensemble, as well as in several Contemporary Music projects such as Koerikoeloem by Miranda Driessen and “Over de beiaardier die in een klok veranderde” by Jorrit Tamminga. She has sung in choirs conducted by Sigvards Klava (Latvian Radio Choir), Rob Vermeulen (Musica Vocale) and Adrian van der Spoel (Música Temprana). Currently she studies Early Music Voice with Xenia Meijer.

Graduating from Royal Welsh College of Music and Drama in 2010, Luke Starkey (b.31 March 1987) is an active performer of early music on lute and theorbo based in Utrecht. Luke has received training in his lute studies from Lynda Sayce and Fred Jacobs. Luke has performed with Sweelinck Barokorkest and London Gala Orchestra, and at the Brecon Baroque Fringe Festival. He has also performed solo recitals and given talks about the history of the lute for The Manchester Literary and Philosophical Society, National Museum of Wales, and Catharijn Convent.