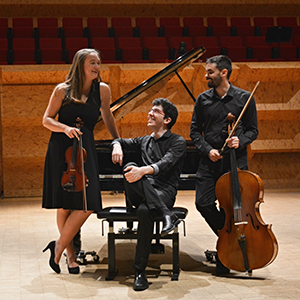 The Santiago Trio is a promising piano trio based in Amsterdam formed by José Joaquín Parejo Bullón (piano), Davita Laseur (violin) and Francisco López Serrano (cello). They are currently studying at the Conservatorium van Amsterdam taking individual lessons with Frank van de Laar, Vera Beths, and Jelena Ocic. They have a great enthusiasm for making chamber music, covering a wide-ranging repertoire. They perform in various halls and venues.

José Joaquín Parejo Bullón began playing the piano at age eight with Eduardo Rodríguez Carrasco in Jerez de la Frontera, Cádiz. He has received masterclasses from renowned teachers such as Niel Immelman, Ricardo Requejo, Alexander Kandelaki, Patrín García-Barredo, and many others. In addition, he has won multiple international and national competitions in solo and chamber music categories in Spain. He is currently studying with Frank van de Laar at the Conservatorium van Amsterdam.

Francisco López Serrano started studying violoncello at the age of 8. He has been a member of the youth orchestra of Almería since he was 10 years old and he is currently playing with the Orchestra of Almería, Mediterranean Youth Orchestra, and Youth Orchestra of the South of Spain. He has taken part in different chamber music groups such as quartets, quintets, trios, duos, and octets. He won the second prize in the national chamber music competition Musica Viva and some other individual awards. He is currently studying at the Conservatory of Amsterdam with Jelena Ocic.

Davita Laseur started playing the violin at the age of nine with Roelof Klaassen and started playing the viola not long after that. Since 2017 she studies the violin with Vera Beths at the Conservatory of Amsterdam and also studies Medicine at the VUmc. She has received masterclasses of renowned violinists like Daniel Rowland and others. She has been concertmaster of a youth orchestra for several years and she takes part in different chamber music ensembles – a.o. in piano trio, a promising string quartet and she collaborates a lot for various projects and concerts.