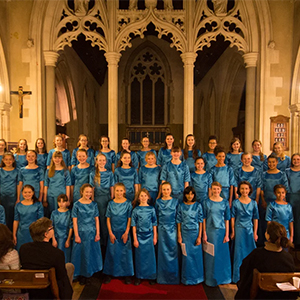 Taplow Girls’ Choir was formed in Autumn 2004 and has consistently enjoyed the membership of about 45 of the best young singers from the area in the age range 10-15 years. The choir rehearses on alternate Saturday afternoons and sings all kinds of music. They have had some notable competition successes: Two silver medals in the international competition in Celje, Slovenia in 2007, an award for 2nd place in the Children’s Category of the International Choral Competition in Tours France in 2010, and reaching the Category Finals in the BBC Radio3 ‘Choir of the Year’ competition in 2008.

The choirs sings Choral Evensong annually in St George’s Chapel, Windsor Castle and has appeared with several local choral societies when they have performed works which have a role for Children’s Choir. They took the role of the Gallery Choir in Benjamin Britten’s ‘St Nicolas’ when the Slough Philharmonic Society performed this work in December 2014 in Eton College School Hall. They have also performed with the Laurie Holloway Trio, Chaconne Brass, Marlow Town Band, The Maidenhead Suzuki Violin and Flute Groups and Ascot Brass.

Previous tours have included Slovenia, Tours in South West France, where the highlight was singing in Cologne Cathedral, and Belgium in 2014 incorporating in the Cathedrals of Bruges, Brussels and Ghent. They have visited Paris twice, performing in Notre Dame, La Madeleine and Chartres Cathedral. They are looking forward very much to their second trip to the Rhineland area of Germany in April 2018.

Please visit our website to find out more www.taplowchoirs.org.uk