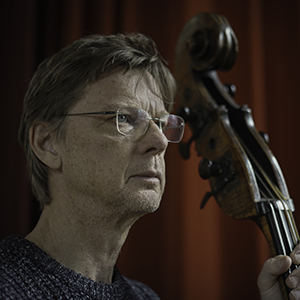 Born in Rotterdam, the Netherlands. Tony Overwater is a top bassist who has won the Boy Edgar Award and the Edison Award, the most prestigious award in Dutch jazz. While a student at the Royal Conservatoire of The Hague, he was discovered by David Murray who was on a tour in Europe and he joined the group, performing in concerts and on recordings such as “A Sanctuary Within” (1992).

He studied with John Clayton, Charlie Haden, and Dave Holland. With saxophonist Yuri Honing’s trio, he explored the fields of neo-bop and free improvisation.

In the meantime, he is collaborating in Arabic and Persian music with musicians such as Kayhan Kalhor, Rima Khcheich and the Rembrandt Frerichs Trio, as well as composing music for many documentaries including the Berlin Award winning documentary Justice For Sergei and Om de Oude Wereldzee. Thus he is highly regarded for his prominent and versatile musical activities inside and outside of Europe. He is currently teaching at the Royal Conservatoire of The Hague.