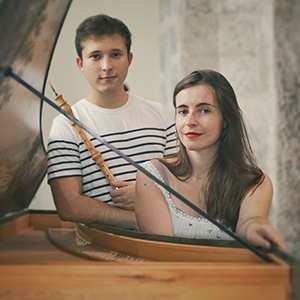 They play in various festivals such as Oudemuziek Festival Utrecht, Innsbruck festival, Duni in Matera and they just finished recording their first CD in La Habana.

They regularly make collaborations with their home countries. For instance in Cuba, where there is not any school specialized in baroque art and music, giving workshops, masterclasses, concerts or instrument donations.

Last year, the first meeting/workshop of Baroque Oboists was organized in the university framework of the College of San Geronimo de La Habana.

Rodrigo López Paz was born in La Habana (Cuba) in 1995. He started his studies of the baroque oboe in 2014 with Josep Domenech Lafont in the Conservatory of Toulouse and actually he is doing his bachelor at the Conservatorium van Amsterdam.

Cécile Chartrain (1996) started the harpsichord at 8 years old with Pascal Dubreuil at the Conservatoire de Rennes and graduated with honours from the same institution in 2014.

Since 2015, she has been studying harpsichord with Menno van Delft and basso continuo with Kris Verhelst at the Conservatorium van Amsterdam, in parallel with her oboe studies in the Conservatoire de Versailles where she graduated in 2018.

She also studied in the Conservatoire National Supérieur de Musique de Paris where she decided to form her string trio, La Chicane.

She is prizewinner of the 40th international competition of Lausanne for early music ensembles and the Vlaamse Vereniging harpsichord competition.