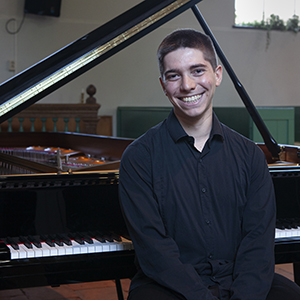 He also receives lessons from fortepianist Olga Pashchenko. Previously, he was a student of Joaquín Soriano, Mariana Gurkova, Nino Kereselidze and Graham Jackson.

At 11 he received the first prize at his first competition and has been since awarded in many occasions, amongst them, first prizes at the “Ciudad de Albacete – Jeunesses Musicales” (2016) competition, “Euterpe International Piano Competition” (2016) in Corato (Italy) and the Audience Prize and second prize at the prestigious YPF Competition (Amsterdam).

He recently performed together with legendary artist Maria Joao Pires in two concerts at the Belgais Center for the Arts.

He has played in every major of Spain as well as in Portugal (Teatro Sao Carlos, Centro Cultural de Belem), The Netherlands (Muziekgebouw in Amsterdam and De Doelen in Rotterdam), Great Britain, Germany, Italy, the US, Australia, etc.

As a soloist with orchestra, he has played concerti by Rachmaninov, Tchaikovsky, Liszt, Beethoven, Mozart, Saint-Saens, Chopin, Shostakovich, Stravinsky and more.