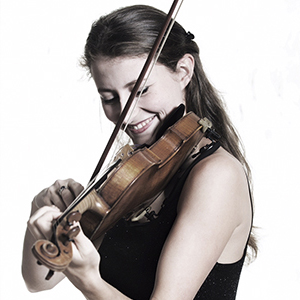 At the age of seven Emma started to play the violin. Her first teacher was Evert Sillem. At the age of twelve she started the young talent program at the Sweelinck Academie of Amsterdam with Prof. Lex Korff de Gidts. Currently she is studying in her fourth year Bachelor education with Prof. Ilya Grubert at the Conservatory of Amsterdam.

She joined the national Prinses Christina Competition multiple times, where she received several different prizes. Each year she participates in a lot of music courses and masterclasses, in Holland, Italy, Portugal, Austria and Sweden. Where she had lessons with for example: Gerhard Schultz, Emmy Verhey, Moshe Hammer, Eliot Lawson, Alissa Margulis. In 2012 she received the prize (‘Laberté Hoedemaker ) at the Peter de Groote Festival for encouragement of her playing. She performed several times in Holland’s greatest hall: the Concertgebouw. In the recital hall during lunchconcerts and during the finals of the Entrée chamber music competition. And in the Main hall as concertmaster of the ‘Groot Entrée orchestra’ with soloist Hannes Minnaar.

Apart from the courses, she received masterclasses from great musicians such as Leonidas Kavakos, Jaap van Zweden and Gordon Nikolic. In 2013 she performed Mozart’s ‘Sinfonia Concertante’ with orchestra in Utrecht.

In 2015 she got accepted as one of the twelve participants to the course ‘Crans-Montana Classics’ in Switzerland.

Chamber music is also a very important aspect in her life and therefore she plays as much as possible together with her colleagues.

Emma enjoyes all kinds of projects and has experience in various ensembles apart from the ones she works with on a regular base. This includes orchestra projects, mostly classical, but also jazz, filmmusic and more contemporary music.

But also smaller ensembles with which she performed on all kinds of events and gatherings.

During her Bachelor studies she worked with a lot of composition students, also of different genres, which inspired and influenced her a lot in her thinking about playing music herself. She hopes that the future will give her more opportunities like this.

Emma is playing on a beautiful instrument build by Carlo Giuseppe Testore (Novara, ± 1665 – 1716), provided by the Conservatory of Amsterdam.