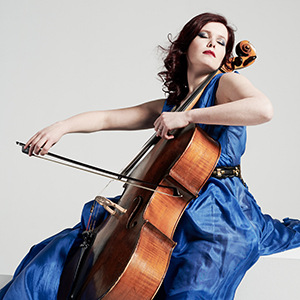 Born in 1989 in Moscow, Russia, Maya Fridman is a talented young artist residing in The Netherlands.

From her early years of playing the cello, Maya was recognised as a prodigy and was taken under the hood of the Foundation of Yuri Bashmet, where she took part in various TV and Radio programs. While studying at the Moscow State College of Music named after Alfred Schnittke, she was awarded as the First Prize Winner in the International Festival of Slavic Music among many other reputable awards.

For the last nine years, Maya has been performing regularly in Europe, in renowned venues such as the Royal Concertgebouw of Amsterdam, Muziekgebouw aan ‘t IJ, TivoliVredenburg and the Vereeniging. Due to her vast musical interests, she always had a passion for improvisation and playing diverse musical styles.

Each of her solo programs has a strong emotional impact on the audience and presents great works of the last century, as well as completely new works of contemporary composers. She was awarded the Best Musician of 2013 Prize at De Grote Prijs van Nederland. Maya’s projects include successful collaborations with Jyoti Verhoeff, Aeon Trio (with Atzko Kohashi and Frans van der Hoeven), Tomoko Mukaiyama, and many more. During 2015 and 2016, she accompanied guitar virtuoso Harry Sacksioni on his Jubileum Tour 65 and joined bands such as Faun and Cesair as special guest. She toured with Asko|Schönbergs K[h]AOS, Noord Nederlands Toneel and Club Guy & Roni in the productions Carroussel (2017), Salam (2018), and Brave New World 2.0 (2019).

During the Cello Biënnale 2016, Maya performed in the role of Margarita in the musical theatre adaptation of The Master and Margarita directed by Dagmar Slagmolen, where she played together with cellist Kian Soltani.

In 2015, Maya released her first album The Invisible Link, featuring works of Alfred Schnittke, Pēteris Vasks, and Arvo Pärt, which she recorded together with pianist Daniël Kool, under the label TRPTK.

A later album features her own arrangement of Prokofiev’s opera The Fiery Angel for cello and piano, on which she worked together with pianist Artem Belogurov. The recording received international acclaim, and was dubbed “… the best chamber music album I’ve heard in 20 years” by American magazine Stereophile.

Maya was musician-in-residence with Gaudeamus in 2018/2019. In 2018 she was nominated for the Grachtenfestival Prijs, and in 2019, Maya won the coveted Dutch Classical Talent Award. She is currently Artist in Residence at TivoliVredenburg for season 2020/2021.