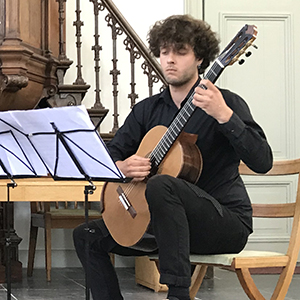 He previously studied with Johannes Moller at the Conservatorium van Amsterdam (NL) and at Cleveland Institute of Music (US) with Jason Vieaux and Colin Davin for two years. He went to the University of North Carolina School of the Arts for four years of high school with a concentration in classical guitar and studied with Joseph Pecoraro and Michael Kudirka.

He has played in a Guitar trio as well as with Oboe and flute playing Hindemith, Bach, Piazzolla, and Tedesco. Paul has also performed many jazz performances with jazz combos and jazz ensembles and continues to practice and perform Jazz alongside classical music.