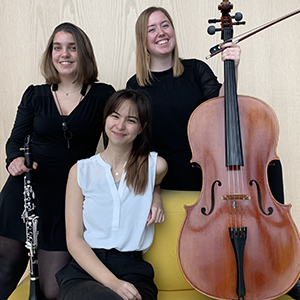 Peter Trio was formed in September, 2019, at the Conservatorium van Amsterdam (The Netherlands). With Marta Pedreira Aldao on the clarinet, Ines Lopez Gallagher on the cello and Katie Yao Morgan on the piano; Peter trio performed works from various of musicians including, Ludwig van Beethoven, Anton Eberl, Paul Juon, Alexander von Zemlinsky and Vincent D’Indy. They have received coaching from professionals in the subject of chamber music such as Frank van de Laar, Michel Dispa, Harmen de Boer and Frank Peters.

Marta Pedreira Aldao (2000), born in the city of A Coruña (Galicia, Spain), started her clarinet studies at the age of 5 with Xocas Meijide: the bass-clarinetist of A Coruña’s Municipal Wind-Band. She continued her studies in the Conservatorio de Música Profesional de A Coruña (Professional Conservatory of a Coruña, CMUS) with Ma Juncal Diago Ortega; and earned the Grao Elemental (Basic degree) and Grao Profesional (Professional Degree) in the years 2012 and 2018 respectively. She won the soloist competition of the CMUS in 2015 and 2017, which allowed her to play as a soloist with the Youth orchestra and the Symphonic orchestra of the school. She attended multiple clarinet courses and masterclasseswith clarinetists such as Arno Piters, Beatriz López, Josep Fuster and Vicente Alberola. Currently, she is completing her Bachelor’s degree with Arno Piters at the Conservatorium van Amsterdam, since September 2019.

Ines López Gallagher (2001) is of Irish-Spanish descent and began her musical training at the age of 5. She studied with Enrique Ferrández and Jacobo Villalba at the Centro Integrado de Música “Padre Antonio Soler” in San Lorenzo de El Escorial (Madrid, Spain). She performed as a soloist at the age of 16 with the orchestra led by Guiseppe Mancini and graduated in 2019 with cum laude in the subjects of cello, chamber music and music history. Ines assisted various courses such as “CelloLeón”, “Forum Musikae”, “AgoraCello” and “Zutphen week” where she received masterclasses from Dmitri Ferschtman, Jeroen den Herder, Asier Polo, María Casado, Iván Siso, Rafael Jezierski, Beatriz Blanco, Pablo Ferrández, Fernando Arias and Johannes Krebs among others. She is currently finishing her third year Bachelor studies, which started in September 2019, at the Conservatorium van Amsterdam with Pieter Wispelwey.

Katie Yao Morgan (2000) is of British and Chinese descent and began to play piano when she was 4. She won the ABRSM Sheila Mossman Memorial Prize for achieving the highest mark in piano grade8 in 2010 and subsequently received a Gold Award in 2011. She pursued her musical studies under the guidance of Marcel Baudet at the Yehudi Menuhin School from 2010 to 2018. Katiewas awarded 2nd prize in Category B (12-16) of the Pianist of the North Competition (2011), and ‘Mention of Honour’ in the International Piano Competition in Enschede (2014). In 2016, she was awarded Diplôme de JEUNE ESPOIR in the 10th Adilia Alieva Competition held in Annemasse (France). In 2019 she won 1st prize at the Amsterdam Regional finals of the Princess Christina Concours in the Netherlands.

Katie has performed at The Wimbledon Festival, Wigmore Hall, and together with the Menuhin School Orchestra, Dorking Chamber Orchestra and the Mihail Jora” di Bacau OrchestraFilarmonica in Cantu (Italy).She regular takes part in music courses, receiving masterclass from musicians such as Jean-Claude Vanden Eynden, Edith Fischer, Dmitri Alexeev, Ronald Brautigam, Idil Biret and Dominique Merlet. She also recently appeared on Podium Witteman as a JongeHelden (2020). Since September 2018, Katie is completing her Bachelor’s degree at the Conservatorium van Amsterdam with Frank Peters.