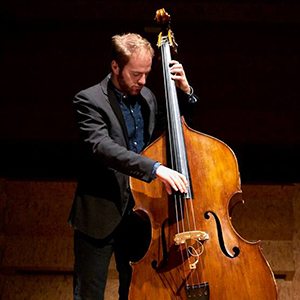 Pierre Balda (1993) is a Double Bass, E-Bass player and composer from Geneva (Switzerland).
He is currently based in Amsterdam where he’s finishing his Master at the Conservatory of Amsterdam.
After 10 years of classical guitar at the Conservatory of Geneva, Pierre started the bass at 18 years old at the AMR, in Geneva and Studied there for 3 years before moving to Amsterdam.
During this period, he played different Jazz (and other music) projects with Maurice Magnoni, Michel Bastet, Dominic Egli, Mathieu Rossignelly, Ohad Talmor, …

He also performed and composed for some theatre and dancing projects with Raphael Rodan, Mayke van Veldhuizen, Sahand Sahebdivani, or Daniel Leveillé and with classical orchestras.