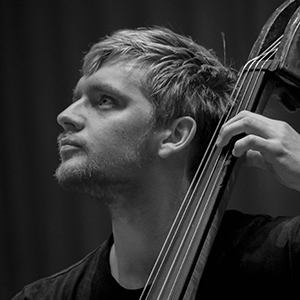 Raivis comes from Riga, Latvia. During primary and secondary school, he sang in a boys’ choir and this was his linking point with music, when, at the age of 12, in a concert performing an oratorio, was so astonished by the sound of a symphony orchestra that he immediately applied to a music school. Raivis played the French horn for six years, and at the age of 18, switched to double bass. He won 1st prizes at Youth State competitions in Latvia on both instruments. Having interest in composition studies around that time, the renowned composer Pēteris Vasks became his mentor.

Raivis was given an entrance scholarship to the Royal Academy of Music in London where he studied modern double bass with Graham Mitchell and Dominic Seldis, and baroque bass with Cecelia Bruggemeyer. He received coaching from many great bass players such as Matthew McDonalds, Joel Quarrington and Bozo Paradžik. In 2014 composed a double bass quintet which was performed in a public masterclass with Maxim Vengerov. In 2016 he took an exchange programme at CNSMD in Paris, to specialise in contemporary music with Nicolas Crosse.

As a performer Raivis focuses on a broad range of music, starting from early baroque music on historically informed set up to contemporary music. Since 2017 he has joined Orchestre Revolutionnaire et Romantique under Sir John Eliot Gardiner and have toured to such concert halls as Elbphilharmonie Hamburg, BBC Proms, Carnegie Hall, Berlin Philharmonie. Since then, He has been asked to play with Anima Eterna Brugge, The King’s Consort, Orchestra of the Age of Enlightenment and recently joining Concerto Koln for several projects.

In 2017, Raivis made several trips to Yeravan, to study with the Armenian composer Artur Avanesov, who has been an important mentor to his musical development. Afterwards, Wim Henderickx was his teacher for his Masters studies at the Conservatorium van Amsterdam. Raivis has collaborated extensively with pop musician Abraham Brody, for whom he has written original ensemble and orchestral arrangements for his music.

Since 2018 Raivis calls Amsterdam home and is continuing his collaborations with different groups and artists across Europe both in writing and playing.