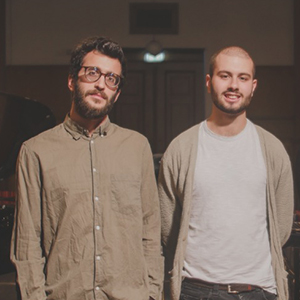 Luca Sguera (1992, Milano) is a piano player, composer and improviser.
After graduating in physics in 2012, he enrolled at Siena Jazz University where he studied, among the others, with Alfonso Santimone, Simone Graziano, Rita Marcotulli and ECM pianist Stefano Battaglia. With the latter he attended for two years a workshop on personal research in improvised solo performance.
Other than improvisation, he investigates composition as layering of signs and meanings, through a practice where rhythm and timbre play a main role.
He is active in several projects (AKA, She’s Analog) with which he released records (Aut, Auand) and performed in festivals and clubs among Italy and Europe.
He’s currently studying, living and performing between Italy, Copenaghen, Berlin and Amsterdam.

Alessandro Mazzieri (Recanati,1995) is a bass player and electronic musician based in Amsterdam.
After classical piano studies, he enrolled at Siena Jazz University in 2014 where he studied jazz music and improvisation with ECM pianist Stefano Battaglia, Daniele Camarda, Rita Marcotulli and he eventually spent the last semester of his bachelor in Barcelona specializing with Gary Willis. He composed and performed around Italy and Europe with his own trio and several other projects such as Luca Sguera AKA, Lilac For People (both released on italian label Auand in 2019) and Radio Trapani.
Always being inspired by the electronic world and possibilities given by new technologies, in 2018 – after graduating cum laude in Siena – he decided to move to Amsterdam in order to attend the Master in Live Electronics at the CvA to develop his own approach to composition and Iive performance with electronics. He is currently working there with projects such as _ofclouds, String Ensemble, and a solo performance as part of the Texture Collective.