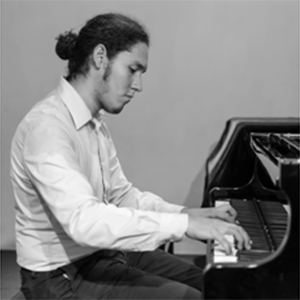 Ecuadorian pianist Aarón Ormaza Vera, began his piano lessons at an early age. He took lessons at the Sergei Rachmaninov Conservatory for most of his life in his home city of Guayaquil, continuing his piano studies at the Faculty of Music of the Holy Spirit University (UEES), where he obtained his diploma in 2016.

Since 2016, he is furthering his piano studies under the guidance of Jan Wijn, at the Conservatorium van Amsterdam.

Throughout his life in Ecuador, he participated in recitals in the cities of Guayaquil, Quito, Cuenca, and Ambato. He would also go on to take part in the most important competitions of his country at the time, being awarded First Prize in the Young Talent Competition in Cuenca (2007, 2013, 2016), Classical Music Competition of the German-Ecuadorian Musical Center in Guayaquil (2007, where he was also awarded the Grand Prize), and the II Chopin Competition of Ecuador (2016).

While in the Netherlands, he has performed in many venues throughout the country, mainly in Amsterdam and its surroundings.

During the season 2018-2019, he participated in the Koffie bij de piano concert/competition (s’Hertogenbosch), where he obtained the 1st Publiekprijs, the 2nd Vriendenprijs, and the Madeleine Mastboom prize for the performance of a contemporary piece; in addition, he took part in the finals of Utopia Klassiek (Drunen), where he took the 2nd Publiekprijs.

Alongside his studies and concerts, he has had coachings/masterclasses with Jeff Cohen, Jean-Baptiste Milon, Geoffrey Madge, Kelvin Grout, and Enrico Pace.

He has appeared as soloist multiple times with the now defunct Youth Symphony Orchestra of Guayaquil, mainly under Patricio Jaramillo, and also with the Guayaquil Symphony Orchestra, where he performed under Fernando Valcárcel. He performed concerti by Isaak Berkovich, Franz Joseph Haydn, Ludwig van Beethoven, Edvard Grieg and Franz Liszt.

He has participated in international piano festivals in the United States (Texas State International Piano Festival, multiple years), and in Cuba (Musicalia, in La Habana), where he had the chance to play for teachers such as: Enrico Elisi, Washington García, Jason Kwak, Marina Lomazov, Barry Snyder, Joseph Rackers, Antonio Carbonell, and Mauricio Vallina.

In his home country, he had masterclasses with Timon Altwegg, Hervé Billaut, and Raphael Lustchevsky.

Being the youngest in a family of 5 musicians, Aarón was always exposed to playing music with others. Therefore, he has accompanied and performed chamber music from a very early age, having experience mainly with string instruments (violin and cello), but also with oboe, flute, and percussion ensemble.

He also performs occasionaly with singers, having also worked as assistant to a singing class during his Bachelor studies in Guayaquil.

Since 2016, he has been working in the German, French, and Spanish lieder repertoire with soprano Marion Dumeige, as part of Duo Romane.