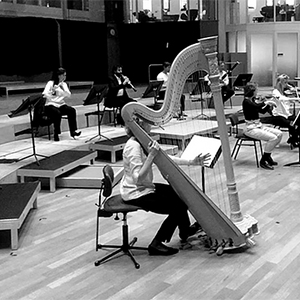 The Amsterdam Music Collective (AMC) was born as a result of the artistic needs of three musicians based in Amsterdam. Their shared vision seeks to bring freshness, versatility and an actual vision on the music sector.

AMC brings to the public the great works of the orchestral repertoire adapted to a reduced formation, discovering new sounds and interpreting them from a dynamic and attractive point of view.

The ensemble also stands out for its flexibility, which allows different formats to be transferred to the stage: from works with 1 – 2 musicians to more complex formations of 14 – 15 players.

Based in the cosmopolitan city of Amsterdam, the group also draws on the influences and the different nationalities that make up the group’s members. All this is reflected on an artistic level in the programming and work philosophy.