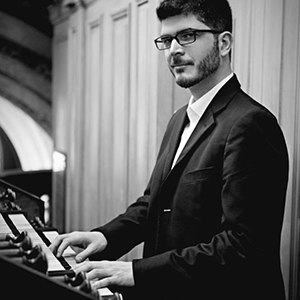 In 2017 he served as professeur d’orgue in the School of Music of comines (Lille, France). Since 2018 he works at the Central Institute for Sound and Audiovisual Patrimony.

Alongside the solo activity he has always developed experimental projects: in 2019 he creates Nebula, a solo project of extemporary composition that explores unconventional soundscapes of pipe organ, using extended techniques, aiming to create a true acoustic sound machine out of the organ. In march 2019 he participated at the XIII edition of ‘Percorsi jazz’ festival (S.Cecilia conservatory Rome) playing positive organ in ensemble with, between others, Markus Stockhausen, Daniele Roccato and Ettore Fioravanti. In 2018 he started a personal acoustic project called “Arskimera” (positive organ, flute and double bass) which aims to play Early Music repertoire mixing with improvisation. From 2012 to 2016 he had a duo (pipe organ and Saxophone) with Domenico Vellucci , playing a repertoire ranging from original pieces for this organic up to transcriptions.

He composes music for organ solo, organ and other instruments, music for image and for theatre. In 2013 he composes the music for the piece “Lei gli direbbe”, theatrical adaptation of the text by Françoise Xennakis directed by Juliette Wayenberg (Fringe Festival, 2013 Rome). In 2012 he collaborates in the realization of the artistic performance “Opera per cantalupo” of the Roman artist Paolo William Tamburella (Naples). In 2011 together with saxophonist Domenico Vellucci he composes the music for the theatrical piece “Mirafiori Outlet”, winner of the Artistic Jury Prize in the competition “Giovani Realtà del Teatro” (Nico Pepe Academy, Udine 2012).

He partecipates at improvisation masterclasses held by Daniele Roccato, Roscoe Mitchell and Gianni Trovalusci, experiencing too the world of improvisation combined with contemporary dance.