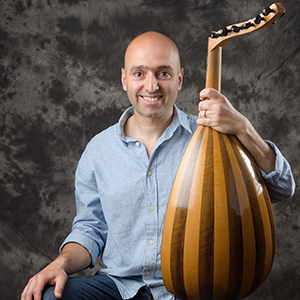 Safia’s music colorfully sources itself from his rich cultural past: he was born in the Village of Kofir Yaseef in Northern Galilee. A versatile and adventurous musician.
Safia graduated from the Academy of Music and Dance in Jerusalem in 2002.

He turned to Europe, in particular, The Netherlands, for cross-cultural challenges, which included successful collaborations with the multinational band No Blues.
Safia has released ten CDs, which produced stunning albums full of emotion ranging from contemplative to exuberant, and jarring to playful instrumentation.

“All of us are different,
but not distant.”

“Stunning compositions full of emotion ranging from contemplative to exuberant, and jarring to playful instrumentation.”

Ud player with a unique trademark

Safia’s oud-playing is known for both its precision and experimentation. His unique combination of classical Western and Eastern instrumentation blends beautifully in a playful musically- styled “conversation,”.

Haytham Safia has long established himself as a talented composer with a well-full of innovative ideas, exemplifying his gift for composition.